Institute for Hellenic Culture and the Liberal Arts

Founded in 2019, the Institute for Hellenic Culture and the Liberal Arts (IHCLA) aspires to have an impact far beyond the academy by promoting a simple fact: Hellenic culture provides not only the basis for all liberal arts education but also the model for successful popular government based on principles such as personal and civic responsibility, civilian control of the military, resistance to tyranny, law applied without respect to person and the right to trials by a jury of one’s peers. Beyond its contributions to government and education, Hellenic culture arguably produced or advanced more scientific, aesthetic and intellectual disciplines than any culture before or since, including astronomy, geometry, music, drama, philosophy, history, ethnography and rhetoric. In a very real sense, the modern West and much of the rest of the world inhabit an intellectual and aesthetic space largely created by Hellenic culture.

The IHCLA differs from other centers focused on Greek culture by explicitly tying the liberal arts tradition to its origins in Hellas and by emphasizing its relationship to citizenship and popular government as well as the continuing influence of Greek culture on the world after the classical and Hellenistic ages. “Hellenic culture” as envisioned by the IHCLA incorporates such crucial features as the Neoplatonism of early church fathers and the research of Byzantine scholars; it includes the modern Greek nation’s struggle for independence and its resistance to twentieth-century totalitarianism; it honors the poetry of Cavafy and Seferis as well as the music of Theodorakis and Hatzidakis.

The IHCLA seeks to promote and foster appreciation of the significance and relevance of Hellenic culture and the liberal arts in the contemporary world in order to propel Greece’s cultural and economic growth in ways consistent with Hellenic values by means of research, academic and cultural exchange programs, fellowships, internships, lectures, policy papers, media productions, symposia and conferences. 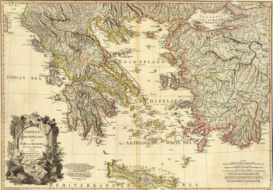 Pericles called Athens an “education for Greece.” Today, Greece has a unique opportunity to offer an “education for the world,” providing an example of the ways the past informs the future and of the values needed to inspire and guide innovation.

In the twenty-first century as in the fifth century B.C., Greece sits at the intersection of two worlds and is again poised to offer leadership in the face of international and local challenges. Greece continues to highlight the importance of looking back to remember and profit from history as we face the future.

Affiliated Faculty of the IHCLA

Specific Initiatives of the IHCLA

The Executive Director and the IHCLA Fellows work with Pierce, Deree and Alba academic leadership and faculty in order to develop and foster secondary, undergraduate and graduate programs and pathways incorporating elements of Hellenic culture and the liberal arts. As part of this initiative, in the summer of 2022 ACG will launch the Hellenic Studies Summer School at Deree College. In a related effort, the IHCLA partners with the Mycenaean Foundation (MF) in order to allow ACG/IHCLA faculty and students to take advantage of the MF’s superb facilities at Mycenae and Mystras.

The IHCLA serves as the organizational hub for ACG cultural exchange initiatives with a particular focus on supporting and empowering Greek diaspora programs, including and building on ACG’s partnership with the National Hellenic Society (NHS) and Heritage Greece (HG). Potential NHS/HG enhancements include:

The IHCLA works to position ACG as a leader in developing solutions for Greece based on innovation and fundamental Hellenic principles such as “excellence, stewardship and liberty.” This outreach includes publications, media productions (including social media), a bespoke website eventually featuring archived publications and media productions, and conferences/seminars/symposia (real-time and virtual/electronic) that seek to bring public officials, academics (faculty and students), and business leaders together to address specific issues facing Greece and the world today. Central to these efforts is the Eudaimonia Initiative, in which the IHCLA, the Institute for Hellenic Growth and Prosperity and the Institute for Public Health collaborate to promote “human flourishing” (eudaimonia) by working to balance economic concerns, public health and civic liberty.

Working together with Heritage Greece and the NHS the IHCLA is developing a number of initiatives aimed especially at increasing the appreciation of Greek culture and heritage among young people.

In 2022, the IHCLA and ACG’s Institute for Hellenic Growth and Prosperity will collaborate with the Center for Hellenic Studies in order to host a conference celebrating the first complete Greek translation of Adam Smith’s classic statement of liberal economic principles, The Wealth of Nations. The conference will be hosted by IHGP Advisory Board Chair and Chief Consultant, Dr. Michalis Psalidopoulos (Professor Emeritus of Economics at the University of Athens and former IMF representative for Greece) and Dr. Nicolas Prevelakis, Assistant Director of Curricular Development and Lecturer on Social Studies (Harvard). Scholars and Fellows of the IHCLA also have access to the CHS center in Nafplio and its superb electronic library.

A collaborative project based at UC Berkeley that seeks to document the administrative, social, economic, and cultural life of the 42 neighborhood-level communal institutions (κοινότητες) of the Greek Orthodox of Istanbul/Constantinople. Led by Professor Christine Philliou, the project features a working group of scholars from Greece, Turkey, the US, and Europe, including IHCLA Fellow Dr. Ilay Ors, working to synthesize this knowledge and produce scholarly publications based on a range of sources including the tremendous knowledge possessed by Constantinopolitan Greeks in the diaspora.

The City of Sparta and the University of Nottingham

The IHCLA has developed a collaborative agreement with the Municipality of Sparta and the University of Nottingham designed to spur research in and appreciation of the Peloponnesian and Spartan contributions to Hellenic history and culture and to allow ACG students and faculty to collaborate in scholarly and civic efforts supported by the city of Sparta.

Working with the Department of Classical Studies and the Program in Modern Greek at Boston University as well as Deree’s School of Liberal Arts and Sciences, the IHCLA is expanding offerings in Hellenic culture at ACG, including the creation of a Hellenic Studies Summer School (beginning in 2022).

Temple University/Ben-Gurion University of the Negev

The ACG School of Liberal Arts and Sciences with the support of the IHCLA has partnered with Temple University and Ben-Gurion University of the Negev (Israel) on a project that involves faculty and student exchanges centering around a curriculum on Eastern Mediterranean Studies. The program will be interdisciplinary and will aim to strengthen students’ understanding of the region through study of the cultural complexities and geopolitical and social dynamics at work trans-historically in the Eastern Mediterranean; it will also produce fertile ground for joint research projects among faculty and junior scholars.

The IHCLA and the ACG School of Liberal Arts and Sciences collaborated with Dr. Tsironis on the conference, “Performance in Late Antiquity and Byzantium,” April 19-24, 2021.

Trip to the archaeological site of Eleusis 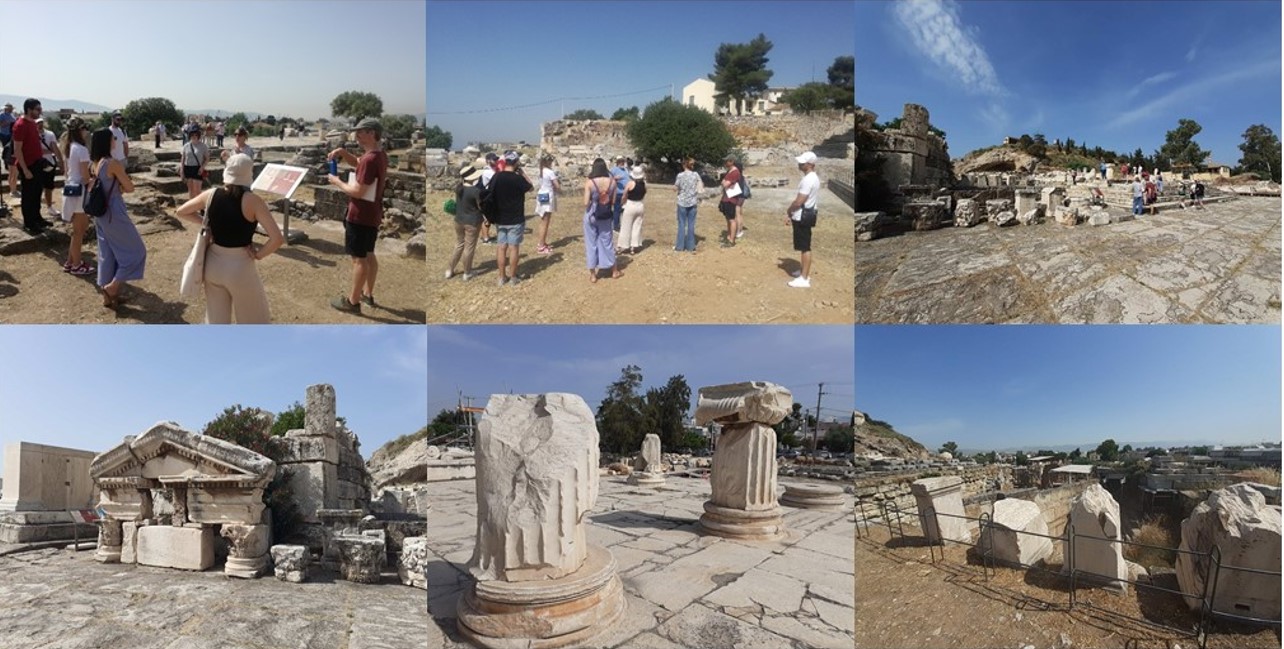 Visit to the Acropolis 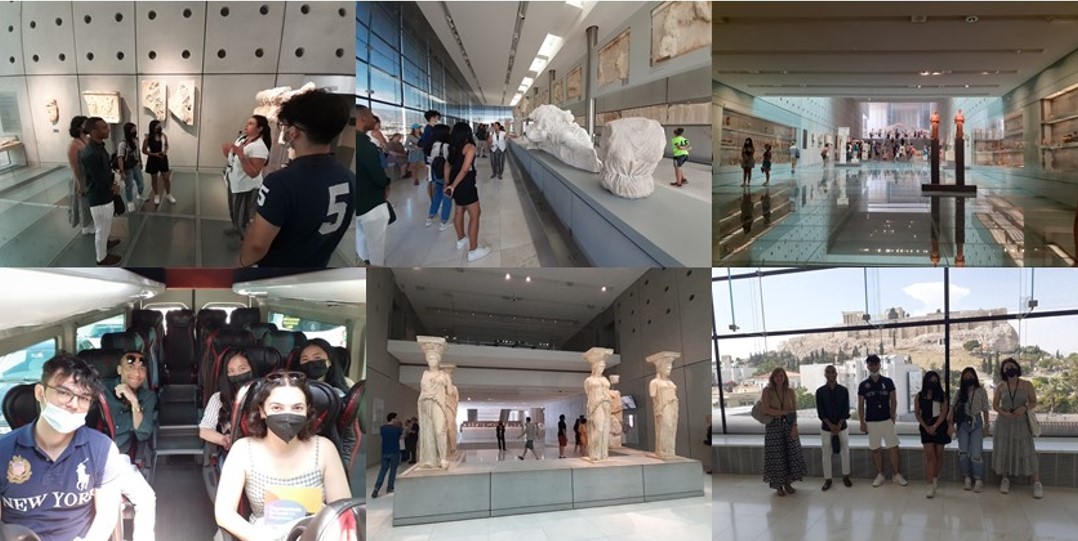 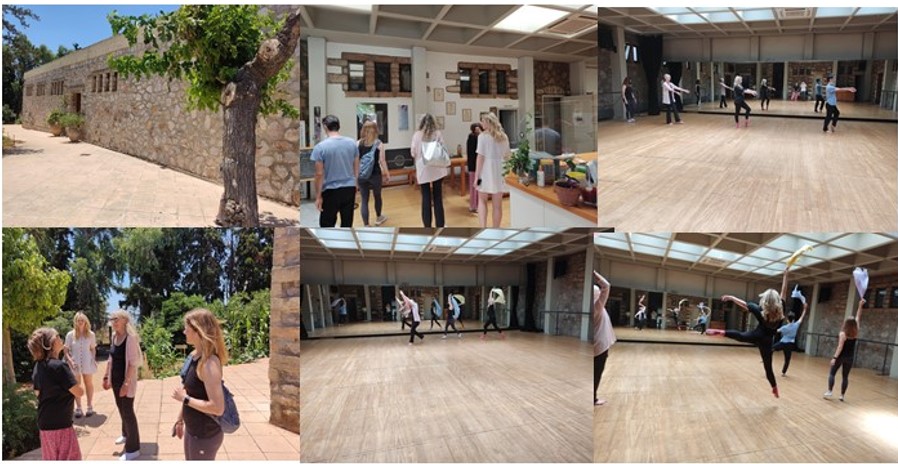 Greek diaspora in times of crises and uncertainty

Greek diaspora in times of crises and uncertainty